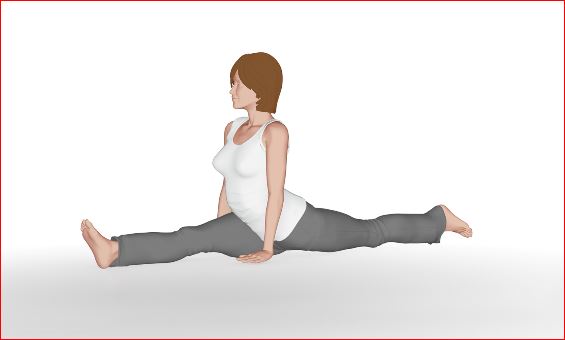 Some yoga poses derive their Sanskrit name from Indian mythology. One of my favorite stories is the one of Hanuman, the Monkey god, and its link to the pose called hanumanasana.

Once upon a time, Anjana a very devout woman prayed to the gods to become pregnant. She was so devout that the God of Wind Vayu decided to answer her prayer. He blessed a few grains of rice and let them fall on her lap. She knew she had been heard. Nine months after eating the sacred rice, she gave birth to a gorgeous healthy baby boy Anjaneya, the son of Anjana. The low lunge, Anjaneyasana is based on his name!

He was very adventurous and playful and always wanted. One day he decided to fly and take a bite of the Sun. After all, he was the son of Vayu, he could do that! Surya, the God of the Sun was furious! He threw a thunderbolt at Anjaneya, which stuck his jaw (Hanuh) and killed him.

His mother was heart-broken. So was Vayu! He took such a deep breath that he sucked up all the air from the earth and refused to let it out.

The gods called an emergency meeting, and it was decided that Anjaneya would be sent away from his mother to live with monkeys. Because, why not? He’d be renamed Hanuman (hanuh means jaw in Sanskrit; and cursed with short term memory, so he would never remember the true extent of his power.

The boy grew up among the playful monkeys and became good friend with King Ram. One day, King Ram’s beautiful wife Sita was kidnapped and Hanuman decided to go and look for her. As he arrived to the edge of the ocean, he knelt down to pray. Remember, Hanuman didn’t know he was a god. So when he got up, it was pure faith and love that gave him the courage to leap across the ocean.

As he jumped one foot reached out toward the island where Sita was being held and once foot reached back toward Ram, which is what inspired the split image!

There are various versions of the story but in all of them, Hanuman shows courage and achieved an incredible jump thanks to his faith. So next time you practise hanumanasana, think of the action of a jump, lifting the core and extending the legs out rather than collapsing towards the floor. Think also about your hidden nature and reflect on the obstacles you are overcoming. How does it feel?